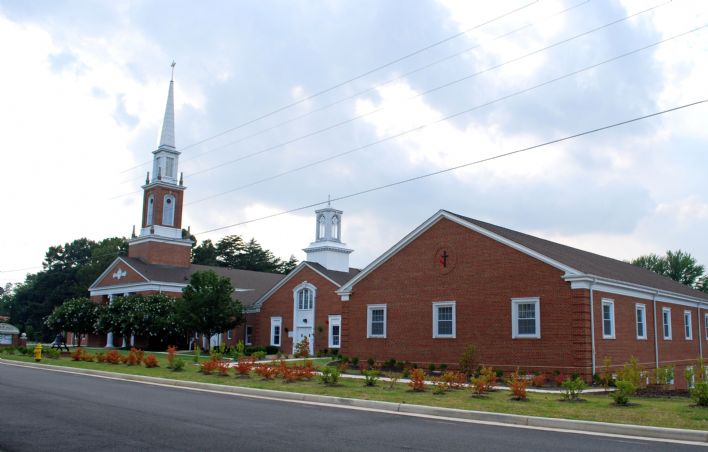 St. Paul United Methodist Church was established at its current location on March 30, 1958, when the Occoquan and Woodbridge Methodist churches merged and celebrated the first combined service as St. Paul. However, our roots in Prince William County go back almost 200 years.  In March 1834, the old Baltimore Conference added Prince William on the Potomac as one of six new circuits.

The first Methodist services were held in the Occoquan/Woodbridge area prior to 1847. The church trustees on Aug. 18, 1862, purchased land in the town of Occoquan to erect a new church. The Occoquan Methodist Episcopal Church, South, was built and dedicated in 1884. It burned down on Aug. 24, 1916, when Occoquan was ravaged by a fire, which destroyed nearly the entire town. A new brick building, the Occoquan Methodist Episcopal Church, South, was dedicated on Dec. 5, 1926, and remained a Methodist Church until March, 1958. Today, this building is the town hall of Occoquan.

As the communities grew, the residents of Woodbridge grew anxious for a church of their own. In 1904, a Methodist Sunday School met in the original Woodbridge Baptist Church (on the corner of Occoquan Road and U.S. Route 1 where CVS is currently located) and Woodbridge School (which was on Occoquan Road across from Almita’s Restaurant). The Sunday School program grew so much that a church was built. The first services in the Woodbridge Methodist Episcopal Church, South, were first held in November 1908. As the church grew over the years, a brick addition was added to the church. Today, this addition is all that remains of the original church building, and it is now known as Dixie Bones BBQ.

The Cranford, Occoquan, and Woodbridge Methodist churches were on the same charge for many years. At one point, there were as many as 17 churches on our charge. For many years, the three churches shared the same minister. Woodbridge had the early Sunday morning service at 9 a.m., Cranford was at 11 a.m., and Occoquan had an evening worship service at 7 p.m. In 1952, Cranford decided to become a station church, thus leaving only two churches on the old charge. Occoquan and Woodbridge remained a two- charge until they merged.

The last services were held in the old Occoquan and Woodbridge Methodist churches on March 23, 1958.

THE NEED FOR MORE SPACE AND CHALLENGES OF MERGER

By the early 1950s, Woodbridge Church had outgrown its facilities and had no more room to expand at its location. So, Roscoe C. Clarke, the church school superintendent, identified a building location. The owners of the land, Doris Bubb and Maurice Botts, donated the property.

Occoquan Church asked Woodbridge to wait and consider a plan of merging the two churches and building a larger church. A plan of merger was drawn up on April 1955 and presented to the members. On May 22, 1955, the Occoquan Charge Conference voted to merge. The final approval was merger by the Virginia Annual Conference on June 16, 1955.

There were many leadership, administrative, and logistical challenges to the merger. It was more difficult than one might realize to combine two totally separate churches — each with their own leaders, programs, choirs, organist, and different Sunday School classes. Everything needed to blend together without slighting anyone who was serving or wanted to serve and overcoming a natural dissonance inherent in change

The name chosen for the new church was Saint Paul although over the years, it was shortened to St. Paul. Groundbreaking ceremonies were held on March 24, 1957.

About May 1, 1957, the chairman of the building committee received a call from the engineer for the Department of Highways, Commonwealth of Virginia, requesting a meeting. At this meeting, the minister and the building chairman were told that our building under construction was within the limits of a suggested right of way for the new Interstate Highway 95, which would prevent building the church at the proposed location. Through the combined efforts of a fighting community, the assistance of a sympathetic Prince William Board of Supervisors, and the power of U.S. Senator Harry Byrd, a different route for the highway was selected, and Saint Paul became known as the church that moved an interstate highway.

On a cloudy Palm Sunday on March 30, 1958, Saint Paul United Methodist Church held its first service. On this day 475 people worshipped in the social hall designed for 350. At that service, 39 new members were received and eight were baptized.

The original parking lot was not paved. Because it was so messy and the women’s shoes, in particular, were getting ruined, a campaign was begun to pave the parking lot. The slogan was “For the Price of a Pair of Shoes.” The parking lot was soon paved.

Shortly after the new church was built, Doris and Mary Bubb gave an additional piece of property, in memory of their parents, for the initial church parsonage, which became known as the Bubb House. Over the years, additional property was purchased from Doris Bubb for a second parking lot and to accommodate plans for growth.

On March 30, 2008, in the midst of construction of a new wing to serve as the social hall and preschool classrooms, St. Paul celebrated 50 years of ministry with a worship service and reception attended by the residing bishop of the Virginia Annual Conference and several former pastors and members. On July 11, 2009, we moved into the new facility and began using it immediately for Vacation Bible School. The first fellowship activity was an ice cream social with hymn singing.  A celebration service was held that September to dedicate the new building addition to God’s service. In September 2009, St. Paul preschool re-opened after being closed during the years of construction.

With a new social hall and new wing of classrooms, additional ministry opportunities were explored.  The most notable included a new worship opportunity and moving our food pantry and clothing closet into the church building.

In October 2009, a new “contemporary” worship service was established, and a praise band, called “Raise the Praise Band” was formed.  This service, called “Awakening,” started as a monthly, Sunday evening worship opportunity.  In March 2011, Awakening changed from evenings to the second Sunday morning of each month in the social hall at 11 a.m., which was the same time as the later of two “traditional” worship services in the sanctuary.  However, by fall 2011, Awakening worship was a weekly service at 11 a.m.

In July 2012 St. Paul made a significant change in Sunday morning worship structure by eliminating the early traditional service and moving Awakening in the social hall to 9 a.m. with Sunday School for all ages remaining at 10 a.m. and with one traditional service in the sanctuary at 11 a.m. An additional prayer worship service was added in September 2014. ​

In 2011, Ghana Wesley United Methodist Church started holding a worship service in the St. Paul chapel at 11 a.m. Ghana Wesley moved their entire ministry to the St. Paul facility in May 20113 and began conducting services in the sanctuary at 1 p.m. Since then, the congregations of Ghana Wesley and St. Paul have combined for worship on each World Communion Sunday and have collaborated in ministry.

St. Paul is known throughout the community as a mission church with a very active, robust outreach ministry. The Outreach Ministry includes the Lord’s Pantry, a twice-monthly food bank; the Lord’s Closet, a clothing, book, and toys giveaway; the Lord’s Table, a weekly meal and worship time for the homeless; Emergency Assistance, a financial assistance program; monthly visits to the county Juvenile Detention Center; providing meals for the Hilda Barg family shelter; and hosting and teaching citizenship classes for people in the process of becoming naturalized U.S. citizens. St. Paul is also an active member of Virginians Organized for Interfaith Community Engagement (VOICE).

The Lord’s Pantry and the Lord’s Closet were initially established in the Bubb House, which no longer served as the parsonage. They closed in early 2012 for five months, after the retirement of the founding coordinator of the Pantry and to facilitate the move of these ministries into the church building.  In June 2012, they reopened in their new “homes” and have subsequently expanded their services from once a month to twice per month.

In addition to the regular, ongoing outreach ministries, St. Paul has sponsored a wide range of seasonal and other community outreach projects, including our Pumpkin Patch; Winter Bag Mission Project to provide food for needy students during the schools’ holiday break; the Easter Basket and Easter egg hunts; open gyms; sports ministries with basketball and softball teams; Stop Hunger Now/Rise Against Hunger; young adult ministries; video screenings; Joined in Christ, a multicultural celebration of faith; and many more.

The Bubb House, renamed Bubb I, and Bubb II, which had been the residence of Doris Bubb prior to passing, are now rental properties.

In 2014, St. Paul purchased a new organ and installed speaker cabinets for the new equipment.  The organ was dedicated for ministry that November. In 2015, St. Paul purchased new glass doors for the entrance to the sanctuary with a gift from Scott Atkinson and funds donated in his memory.

Over the years and continuing today, St. Paul’s building has served as the church home to nurture the spiritual growth of thousands of worshippers and congregants and to grow a thriving church family, committed to loving our neighbors, serving the needs of our community, and developing disciples of Jesus Christ.